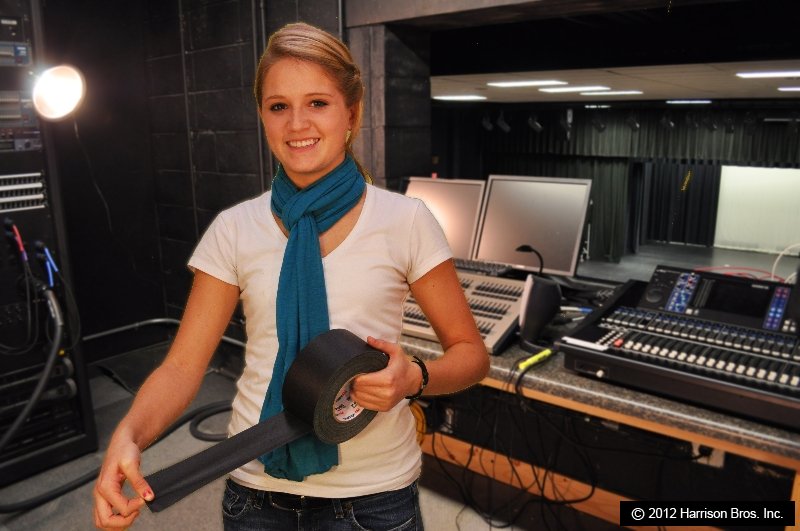 Gaffers tape like Pro Gaff is a must-have for every production, but just what is a gaffer? Despite some popular misconceptions, the term Gaffer has nothing at all to do with long poles or “gaffs” used to remotely control lighting instruments. This is evidenced by simply looking at movie lights throughout the past 100 years. Only a few lights from relative newcomers like ColorTran and a few Italian manufacturers – and popular in only a few TV studios – had knobs designed to be controlled this way.

In reality, Gaffer is British slang for “grandfather” and is meant as a term of respect. In the early days of the movie industry, the lighting equipment was often huge and extremely heavy. The only people experienced in moving that kind of stuff around were longshoremen – the dock workers who load cargo onto ships. These guys were unionized and worked in highly structured teams. At the top was the older and more experienced “grandfather” or – Gaffer. Of course, that meant his most experienced apprentice was – can you guess? – his Best Boy.

Today the term Chief Lighting Technician is often replacing that of Gaffer, but the duties are the same. The Gaffer is head of the lighting department, and one of the most crucial people on the movie or TV production set. He and his crew, referred to as Electricians, Electrics or Lamp Operators are responsible for running all the electrical cable and placing the lights. The Gaffer confers with the Director of Photography or D.P. to determine what sort of lighting effects are needed and devises ways to create those effects. Gaff tape has inherited this classic production title.

The equipment and techniques for using it have changed greatly since those early days, but generally the work is the same. Since film images (or TV pictures) are nothing without light, you can see that the work of the Gaffer, his Best Boy, and the other Electricians is pivotal. By the way, in television, the top lighting person is often a cross between that of a D.P. and the Gaffer and he or she is usually referred to as the Lighting Director. Gaffers tape is an important tool for these key lighting personnel.

Whether the job is a feature film or an industrial video on a low budget, the Gaffer must have an extensive knowledge of the film stock or video cameras being used, the lighting equipment and techniques employed, and effective leadership principles. It is of paramount importance that they be able to accurately estimate the time required for a particular setup in order that actors and other principals may be scheduled accordingly.

The Gaffer’s Grip cousins have a slightly different task. While most “civilians” – those outside the business – think Grips are just “go-fers”, nothing could be further from the truth. Grips are the real engineers of the set. When a camera has to be strapped to a car for a high-speed chase, it is the Grip’s job to do it safely. When dolly track has to be laid for a long, smooth shot, Grips take out their levels and boxes of “wedges and cribbing” to make sure the camera won’t feel any bumps. The top grip is called the “Key Grip”, and he too, has a “Best Boy”. Pro Gaff tape plays a part in many of these camera set-ups.

Grips are also vital to lighting the set. Outside, when reflectors and bounce materials are stretched on large frames to control the light, that is the job of the Grip department. They also place shadow-making devices called flags – rectangular black cloth frames, or nets – similar, but made with a netting material that reduces rather than eliminates the light. Black gaffers tape is often used in lighting set-ups because it has a matte finish that doesn’t reflect light. The difference between “lighting” and “illumination” is controlling the shadows. Generally, that is the job of the grip department. As we often say to newcomers who have trouble seeing the difference between the two departments, “The Electricians make the light, the Grips make the shadows.”

Shop here for Pro Gaff in 4 widths and 19 colors.